I climbed higher on Dumpling Mountain, scanning the nearby hills for big lumps of dirt. There was still a nip in the air, but I didn’t mind. I was joining a biologist friend on his early spring ritual here in Alaska: looking for (empty) bear dens. The giant brown bears had recently waken up from hibernation, and were leaving their winter homes behind.

We don’t have brown bears here in Southeast Ohio. But we do have many mammals who start to move around when the cold thaws. Just as I loved watching for fresh signs that bears had woken in Alaska, I also love watching for the first clues that bats, groundhogs, and birds are moving around again here.

On this week’s virtual field trip, we’ll look for signs of animals waking up for spring!

Attend the virtual field trip, Friday, March 12 at 10:30 am, for more stories about bears and other animals.

Pretend to be a hibernating animal. How do animals’ bodies change when they hibernate?

Watch for signs of animals outside. What is changing out there?

Every Friday from 10:30 to 11:15 AM, we hold a Zoom call live from the woods for anyone who wants to join. This week, I’ll share more bear stories. And we’ll look at other animals who are showing up with the warmer weather here in Ohio.

If you haven’t registered for our field trips before, register here to get the link in your email:

When Brown Bears Wake Up in Alaska

The dens weren’t the first sign bears were exiting hibernation. The first clue was leaving my cabin in the morning, and almost stepping in this:

Yep–bear scat. But this isn’t just any bear scat. It’s clearly the poop of a bear that just woke up. Why? Because it’s full of sedge (a plant like grass). In early spring, bears are hungry from not eating all winter. But at least in this part of Alaska, there is still not much to eat yet.

When there’s more food later in the year, their poop will start to look different:

We also saw a few fresh scratches on the trees near camp. :

So we knew it was time to find empty dens. We knew they’d be near last year’s dens, on steep hills where water runs off and dens stay dry. But these bears dig new dens each year. So we didn’t know exactly where they might be.

We scanned the open hillsides for piles of dirt, a sign of where bear dug entrances to dens. Brown bears have powerful claws and strong, muscly humps on their shoulders, which help them dig their dens. Another clue we looked for was old, dry moss. Bears sometimes use moss and plants to keep warm. The moss can get pushed out when the bear leaves.

We didn’t find dens that day, so my friends showed me their pictures from last year. The dens were big enough to crawl inside–so some people did! 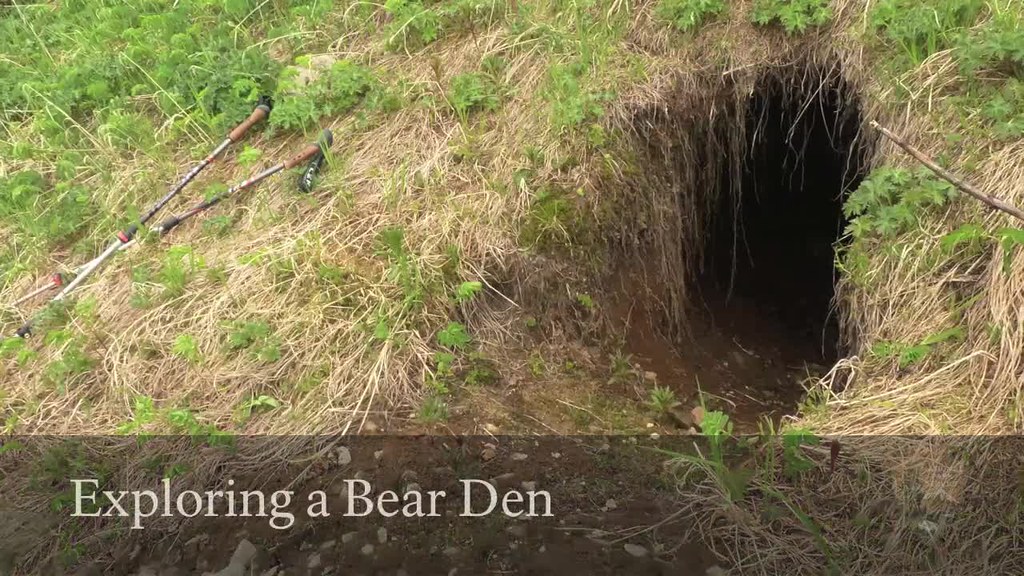 Could you imagine spending the whole winter in there? Where would you pee? Well–you wouldn’t!

When bears go to sleep in winter, their body slows down.

Their heartbeat is slower, and they breathe more slowly.

Their body recycles their pee and poop so they don’t have to wake up at all!

They do all this so that they can survive winter without needing food.

However, bears are ‘light’ hibernators. They can wake up in case they need to defend themselves, or to search for food on a rare warm day. Female bears even wake up to give birth in their dens!

Other kinds of hibernators, like a groundhog, couldn’t do this. A groundhog’s heart and breath slows down even more deeply, and their temperature gets colder. You could pick up an animal like this, and they wouldn’t even react.

Even though bears use less energy in winter, they still use some energy. So when they come out in spring, they are pretty skinny. The entire summer and fall are all about eating enough food to get through the next winter. Bears that get really fat will be better at surviving and having cubs.

You can understand why they might be a little grumpy when they wake up!

Try to imagine your body changing the way hibernating animals do.

It’s pretty amazing that bears and other animals can slow down their bodies so much, and then go back to normal come spring. Human bodies aren’t built to do this. Some scientists think that studying how bears do it could help make new medicine for humans.

Animals waking up in Ohio

We don’t have brown bears in Ohio. But we do have many other animals that are starting to poke their noses outside their dens now that it’s March! My heart sings every time I see a sign of an animal I haven’t seen for several months.

Black bears do live in Ohio, although they are pretty rare. You’re more likely to see them in nearby West Virginia. Like brown bears, they hibernate lightly. They are even more creative with their dens: they might have spent the winter in a hollow tree, dug beneath some tree roots, in a thick leaf pile, or even underneath a neglected porch!

If you are lucky, you might see black bear tracks someday!

Yesterday at sunset, the first bat of the year flew over my head. Most Ohio bats hibernate in the winter, but a few migrate. Hibernating bats often gather in big groups in caves (or, around here, old mines!).

When it gets warm in summer, they’ll move to hollow trees, or even roost under the loose bark of a shagbark hickory!

Keep an eye on the sky at dusk, and you might see them swooping for insects.

This time of year, I start to see more critters under logs! Many small animals have been staying warm underground, but are starting to move nearer the surface. Yesterday, we turned over a log near a pond and saw our first red-backed salamander of the year. If you find one

Some native bees have also been sleeping underneath logs. These kinds of bees are different from honey bees and live alone. If you find one while they are still sleepy, they may barely move, or move very slowly. But when they warm up, they will fly fast again. So be gentle!

And of course, birds that we haven’t seen for a few months will start to fly through again! Have you heard the loud calls of geese overhead yet?

When you’re outside this week, keep your eyes open for any animals you haven’t seen for a few months. Are you seeing any new tracks? Who is flying over your head? Is anyone moving around under logs or in the garden?

Have you seen any spring animals moving around? Tell us about it in the comments! 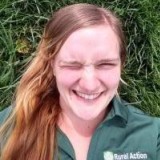