, hollow, and have brown bark that may peel off in shreds.

, that’s OK!) Add water and boil the vines for about 10 minutes. Once boiled, let sit until cool enough to touch. 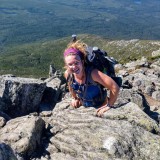